What does a hellbender look like?
Hellbenders are very long, measuring 12 to 29 inches. Their color ranges from drab brown to olive brown, with irregular black marks scattered on their backs and tails; their undersides are lighter, ranging from light brown to yellowish-orange. Hellbenders are soft and fleshy—their skins seem too loose for their bodies. Their bodies are somewhat flat, especially at the head, and the mouth is large with small, sharp teeth on both jaws. A smaller set of double crescent-shaped teeth are found on the roof of the mouth. The eyes are small, beady and unlidded.

For more than 20 years, biologists around the world have been worried about declining amphibian populations. Researchers working on every continent and in every habitat type have reported major problems in at least some amphibian groups. About one-third (33%) of the amphibian species we know about have declined to the point where they are regarded as threatened or endangered. While 60 percent of the remaining species appear to be in good shape for now, the status of the other 40 percent is uncertain. One of the problems is that we know very little about many amphibian populations, so it is hard to describe their overall health.

The hellbender (Cryptobranchus alleganiensis) is a native salamander in need of such help. One of North America's largest salamanders, the hellbender depends on clean, cool, fast-moving mountain streams and rivers for habitat. It is found in three distinct populations in the eastern United States: one in the southern Ozark Mountains (C. a. bishopi); one further east, primarily in the Appalachian Mountains (C. a. alleganiensis); and a third, relict population (C. a. alleganiensis) in the northern Ozarks. 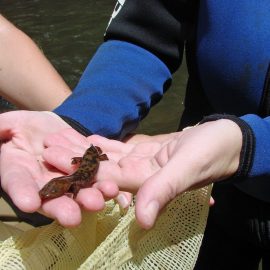 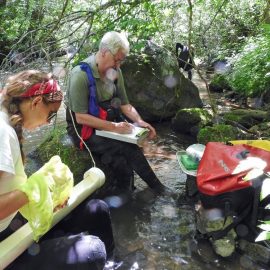 Hellbenders are Federally listed as a “species of concern” and may be a candidate for listing as an endangered species. Human impacts like acid mine drainage, dam construction, siltation from farms, forestry, and housing development... Read More