Nest #7 – 1 July 2015 – Corolla NC
Sometimes it is really difficult to see a turtle crawl in the sand. Seldom do our drivers miss one. On this day, though, there were no early reports of a crawl but, at 10:30 AM, Karen Clark got a call that someone saw a turtle laying eggs at about 2:00AM on the Corolla light beach. Most of the crawl was obliterated by the cabana boys who had already set up on the beach for the day. The lucky visitors who got to see her nesting shared photos. This nest was measured and marked.

UPDATE 8 SEPTEMBER 2015: NEST 7 PASSES DAY 65
Nest #7 was a nest that the ATV driver missed. That is easy to do. It was laid very close to the high tide line and visitors had obliterated its crawl while setting up their beach equipment.

Someone reported seeing the turtle the night before. The nest was found at noon the next day but could not be moved; we were concerned that moving the eggs would detach the embryos and the turtles would not develop. Because it was so close to the high tide it has been washed over several times.

Now at Day 65 of incubation, NEST volunteers still hold out hope that the turtles will hatch. This nest probably will take a little longer to incubate because it has been cooled off by all of the washovers. We will just have to sit and wait. We have been lucky with our early hatchings this year.

UPDATE 16 SEPTEMBER 2015: STUDENTS HELP MONITOR NEST #7
NEST is very excited to keep the community, and especially its youth, involved in our sea turtle conservation efforts. So, when we realized Nest #7’s sitting window was kicking off the same day that Water’s Edge Village School (WEVS) started, and that the nest was less than a mile walk from the school, we asked the school if it would like to adopt and help monitor the nest.

WEVS (pronounced “waves”) is a K-6 charter school located in historic Corolla, North Carolina. With 26 students, it is the smallest public school in NC. So, on the first day of school, students and teachers attended NEST’s Nest Sitting Training and, in the evenings, hit the beach with their families and helped monitor this nest. They raked runways, shooed away ghost crabs, and told many beachgoers about how we help protect sea turtle hatchlings when they make their journey to the ocean. 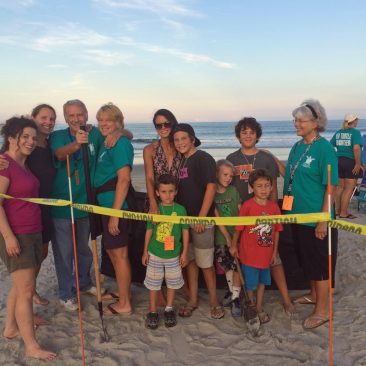 As we know, this nest was repeatedly washed over by the waves. At excavation, all of the eggs were found to be undeveloped. There was water in the bottom of the nest, as well as lots of fungus and bad odors. It was not a real positive experience for the children, but they have learned there is good and bad with nature. We work to make more good. If we had been able to move this nest to a safer location, the result likely would have been more positive. We hope the students and their families will be able to witness a perfect hatching event in the future, and we really appreciate their interest in nature, sea turtles and conservation. 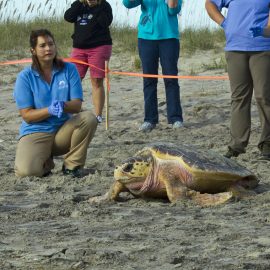 After more than five months of rehabilitation at the North Carolina Aquarium at Roanoke Island, a loggerhead named "Crest" was returned to the beach and set free into the open ocean. 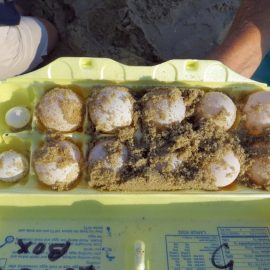 Things look bad for Nest #20 after waves washed over this nest and carried the eggs out to sea. Tourists retrieved some of the eggs, but it will be a miracle if they actually produce... Read More