Nest #22 was our biggest surprise of the season. Somehow an ATV driver missed a turtle crawl on the beach in Southern Shores, North Carolina. Visitors called one afternoon to say that they had seen 100 little turtles hatch and go to the sea the night before. They led them to the ocean as best they could and then, late the next afternoon, they called the sea turtle hotline to report what they had seen.

With miles of sand on that beach, it was very difficult to determine the area where the turtles may have been incubating. After much searching, a possible nest cavity was found way up in a dune. It was marked off and monitored nightly for three nights, after which we could excavate the possible nest.

We began digging in the suspected nest. After checking the suspected nest and finding nothing but sand, multiple holes were dug, but we found nothing. There were no turtle eggs anywhere in the sand. As we found no sea turtle eggs, we can only report that this was a possible sea turtle nest. Nevertheless, we are grateful to our visitors for escorting the hatchlings to the sea. It was a fun surprise for us! 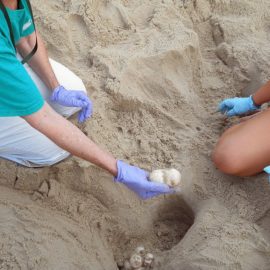 Nest #18 was laid close to the high tide line and close to a fishing pier, so NEST volunteers moved it to a safer place. Read More 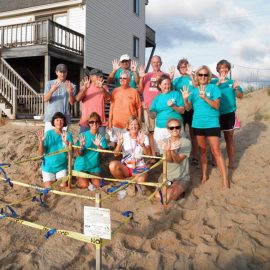 Nest #9, laid on the 4th of July, is the first nest in Kitty Hawk, North Carolina in several years. Read More