Nest #18 – Nags Head – 27 July 2015
Once again the NEST hotline got a late night wakeup call about a female turtle nesting on the beach at Nags Head, North Carolina. As you well know, we do not take flash pictures of sea turtles or touch them without protection and training. When visitors discover a nesting sea turtle, some of them do not know about the protections required for endangered species. As the sign on each nest we mark says, “It is unlawful to harass, molest, collect or otherwise harm sea turtle eggs or hatchlings and adults.” Using camera flash or flashlights, or touching the animal, is considered harassing.

Luckily the Nags Head police department was at the beach and ready to assist the NEST volunteers. The nesting area was roped off with police tape for the night. Early the next morning the NEST response team arrived to assess the situation. As you can see, the nest was laid close to the high tide line and, worse yet, close to a fishing pier. Lights stay on all night at the pier. When the hatchlings emerge they always head for the brightest thing they see. The lights would lead them to the pier where there are fish eager to devour the little turtles. This nest had to be moved.

We carefully place the eggs in egg cartons to transfer them to a safer place. What a surprise to find one egg was a double. Several years ago we had a twin egg that hatched. One of the turtles was fully developed and went to the sea, while the other was too small and not viable. This will be a special surprise when they emerge. We hope there will be two healthy turtles in that egg. Team #18 was proud of its successful effort to move 139 eggs to a safer place on the beach.

This nest was originally deemed Nest #19 (that’s why the Nest #18 is holding up nineteen fingers in the photo below), but the crawl that was thought to be a nest in Corolla was found to be only a false crawl. A false crawl occurs when a female turtle comes ashore to lay her eggs but does not lay them. 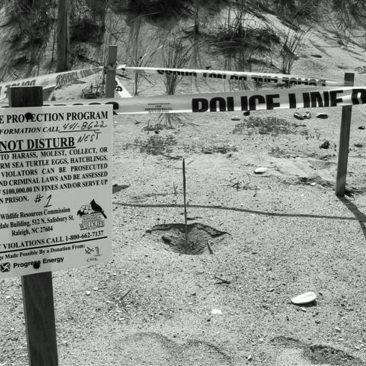 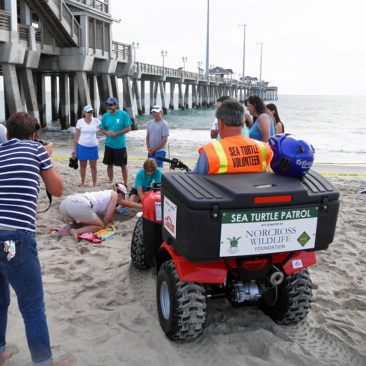 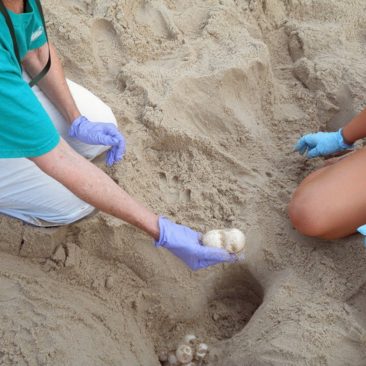 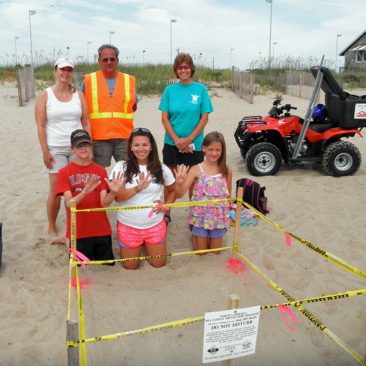 Sea turtles come out of the ocean for just one reason—to lay their eggs. They can see well in water but not so well on land. They are easily spooked and will abandon their nesting if frightened. That is why it is so important to remain quiet and still if you see a turtle coming ashore, and to stay that way until she begins dropping her eggs. At that time you can move a little closer but, of course, do not use a flashlight or take flash pictures.