Nest #17 – 19 July 2015 – Duck NC
Grammy Dee found her first sea turtle nest as she was vacationing in Duck NC. She quickly called the NEST hotline and eagerly showed the nest site to her handsome grandsons: Drew (age 9), Max (age 8) and Jack (age 11) Bartlett from Knoxville, Tennessee. What a great way to end their vacation on the Outer Banks!

This was an efficient female turtle. She crawled straight up to the dune, laid her eggs and then crawled straight out. This nest was left in situ. ATV driver Les Kempf recorded measurements as Jim Dilley prepared to install stakes to mark the nest. 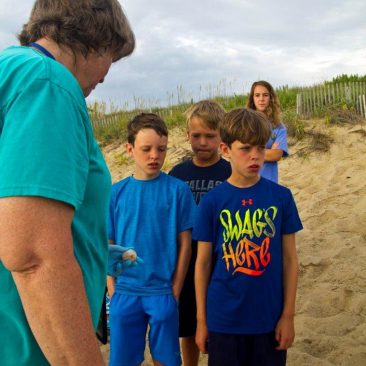 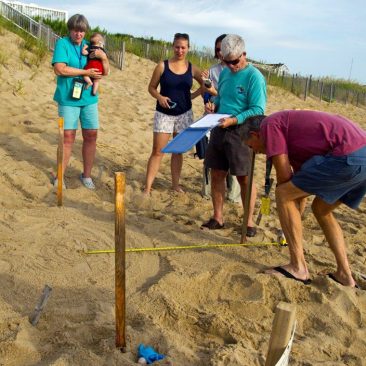 We had a nest at this same beach access last year. Loggerheads usually nest every two or three years, so it probably wasn’t the same female, though it may be a sister. We will find out when the DNA from the egg is analyzed. As we know, it is believed that, when baby sea turtles leave the nest, they imprint with a “magnetic compass” in their brains and may return to nest on that same beach (their natal beach) at sexual maturity, which comes 25-30 years after their birth. That is a long time to remember where a beach is. That is just another amazing miracle of nature that we do not fully understand.