Nest #14 – 13 July 2015 – Nags Head NC
There was an escarpment (a drop off) that this female loggerhead had to scale to get to the spot on the beach she had chosen to lay her eggs. It was too close to the high tide line, so the 95 eggs in this nest had to be relocated. Maggie retrieved the magic egg that will yield the female turtle’s DNA and placed the shell in a vial to be sent to the University of Georgia. We only send the egg shell because it contains only the female turtle’s DNA. This study focuses on just female loggerheads from the Northern Recovery Unit (which includes North Carolina, South Carolina and Georgia). 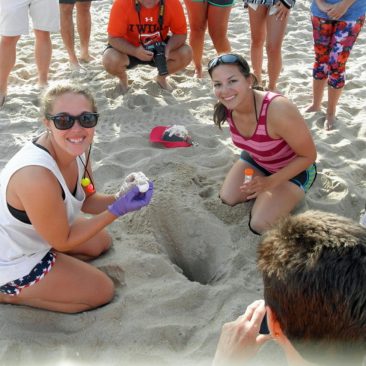 This population of sea turtles differs distinctly from all other loggerhead populations in the world. By collecting an egg for DNA fingerprinting from every nest, researchers hope to identify all loggerhead nesting females in the population and possibly answer the following questions: