The Nestbox Project
Cairina scutulata usually nest in tree cavities and, in captivity, these ducks lay their eggs in nestboxes built by humans. In other countries, managers have had success increasing populations of threatened duck species by providing human-built nestboxes in the wild. This method of increasing population size may also be successful with Cairina scutulata. We did a pilot project to build and erect nestboxes for white-winged ducks in Way Kambas. The goals of this project were to:

Twenty-five boxes were built of wood from local wood shops——mostly wood from the durian tree. We used nails and wood glue to attach the bottom, sides and front to each other. For the top, we attached two hinges in the back so we could lift the top up to monitor the contents of the nestbox and to more easily clean it out. The measurements and shape of the boxes were based the longest dimension (the length) of a female White-Winged Duck. We put four small holes in the bottom to allow water to drain out. In addition, we stapled a 10 cm x 10 cm piece of hardware cloth below the hole so that the ducklings have a rough surface to climb when they leave the nest.

The boxes were erected in a shady spot, over water, and with a clear pathway in front so that the ducks had room to fly into the box. In addition, the nestboxes were located far from where illegal fishermen typically go. In each box, we placed wood shavings and dried grass clippings in the bottom to a depth of about 4 cm. 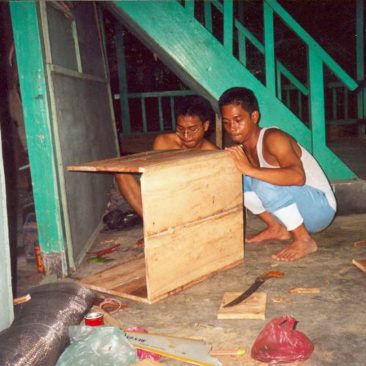 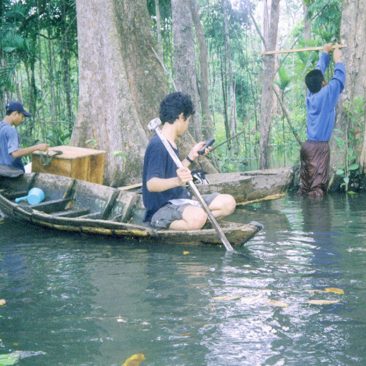 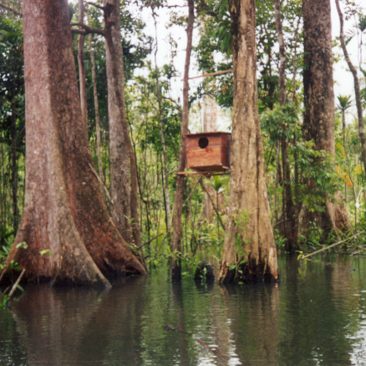 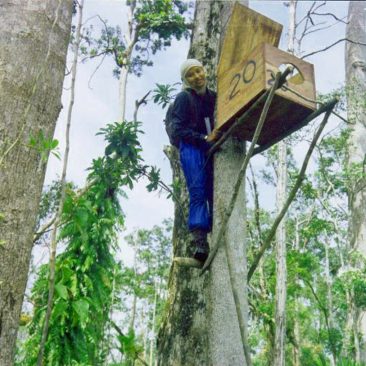 To determine what animals may be potential nest predators, we placed three domestic chicken eggs in each of 10 nestboxes for two-three weeks and monitored the results. Five of the boxes were in swamp forest or marsh edge habitat, and thus the box was surrounded by water, while five boxes were on the banks of forest ponds. In the swamp forest boxes, all eggs disappeared from one box and one egg disappeared from another. There was no sign of what may have taken the eggs (the nesting material was not disturbed). Possibilities include rodents, snakes, primates, or humans. Other potential predators, such as monitor lizards or civet cats, probably would have disturbed the nesting material or left some other sign. In the forest pond boxes, all eggs disappeared from one box and one egg was broken in another, again with no signs of the predator’s identity. We assume that the one egg was broken by a small rodent. In a third forest pond box, a mouse buried the eggs in the process of building a nest. We assume that rodents would not be a factor if this were an actual active duck nest.

In the 2001 nesting season (January-May), no White-Winged Duck nested in any nestbox. We never observed a duck enter a nestbox; typically, females survey potential nest holes before choosing a nest site. However, the female usually is at the potential site for less than two minutes, and we easily may have missed a visit to one of the nestboxes, if it occurred. We also did not have any other bird species utilize the boxes for nesting. Small mice were the only mammal species that we encountered, and only in nestboxes erected on trees that were not completely surrounded by water. Spiders, ants, small snakes, small lizards, and scorpions also frequently inhabited the nestboxes. None of these small animals would be a deterrent to a duck that wanted to nest in a box.